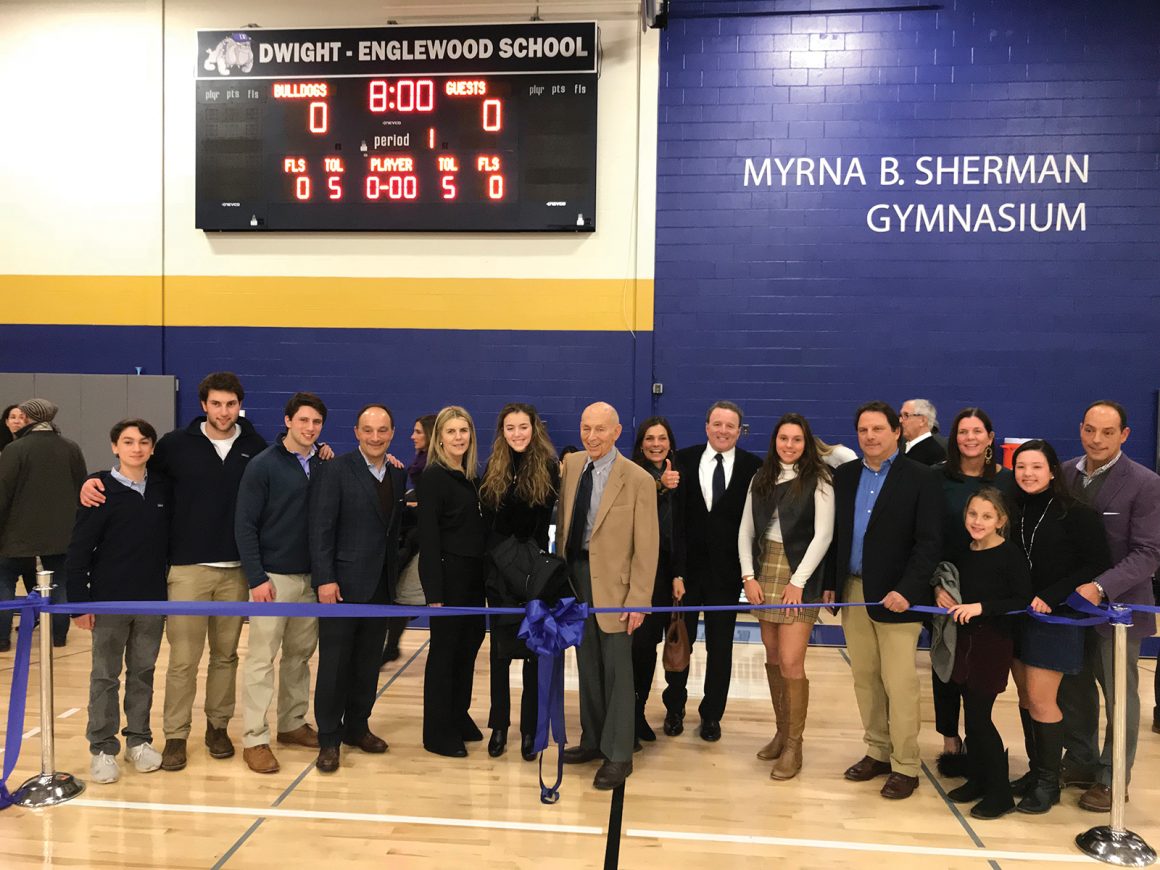 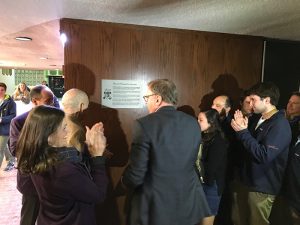 The Big Reveal: A commemorative plaque now installed at the entrance to the Myrna B. Sherman Gymnasium was officially unveiled during the December 15 dedication ceremony.

Bulldogs of all ages came together for the dedication ceremony of the newly refurbished Myrna B. Sherman Gymnasium on December 15, an event that coincided with the first home games for both the Boys’ Varsity and Girls’ Varsity Basketball teams of the Winter 2017-18 season.

The new name is in memory of the late Myrna B. Sherman, the mother of William ’81, Michele ’83, and Laurence ’88 Sherman. The Shermans and their longtime friends, the Klein family—including Mark ’80, Michael ’81, and Rachel ’87—were honored guests at the dedication event, which began with a reception in the Imperatore Library.  Speaking for the Klein family, Michael noted that Myrna was with them all in spirit and he gratefully acknowledged the presence of Myrna’s husband, Joel. Michael then read from a commemorative plaque now installed at the entrance to the gym (see photo). He noted that the plaque’s words were meant to capture the value of the relationship between the Sherman and Klein families when they were D-E students and student-athletes playing together. “Myrna’s support meant so much to all of us,” he said. “Now that I look back on those years I realize how fortunate we were to have had these friendships, and I treasure those memories.”

Members of Sherman family also spoke and expressed their sincere thanks to Michael and the entire Klein family for “a lifetime of friendship.”

Everyone then walked together for the unveiling of the plaque, followed by a ceremonial ribbon cutting on the beautiful new wood floor.

For a video of the dedication of the Myrna B. Sherman Gymnasium, watch below.

The commemorative plaque includes the following:

“ …The Myrna B. Sherman Gymnasium will endure as a significant and critical facility serving as the primary location on campus for practices, competitive athletics and community building events.

The Myrna B. Sherman Gymnasium, located adjacent to the Silberfein Gymnasium, serves as a testimony to the closeness of relationships within the Dwight-Englewood Class of 1981 and its families.

Finally, the Myrna B. Sherman Gymnasium reflects the best of our Dwight-Englewood School community, as we honor an exceptional woman, mother of three talented student-athletes, who literally never missed a game.”