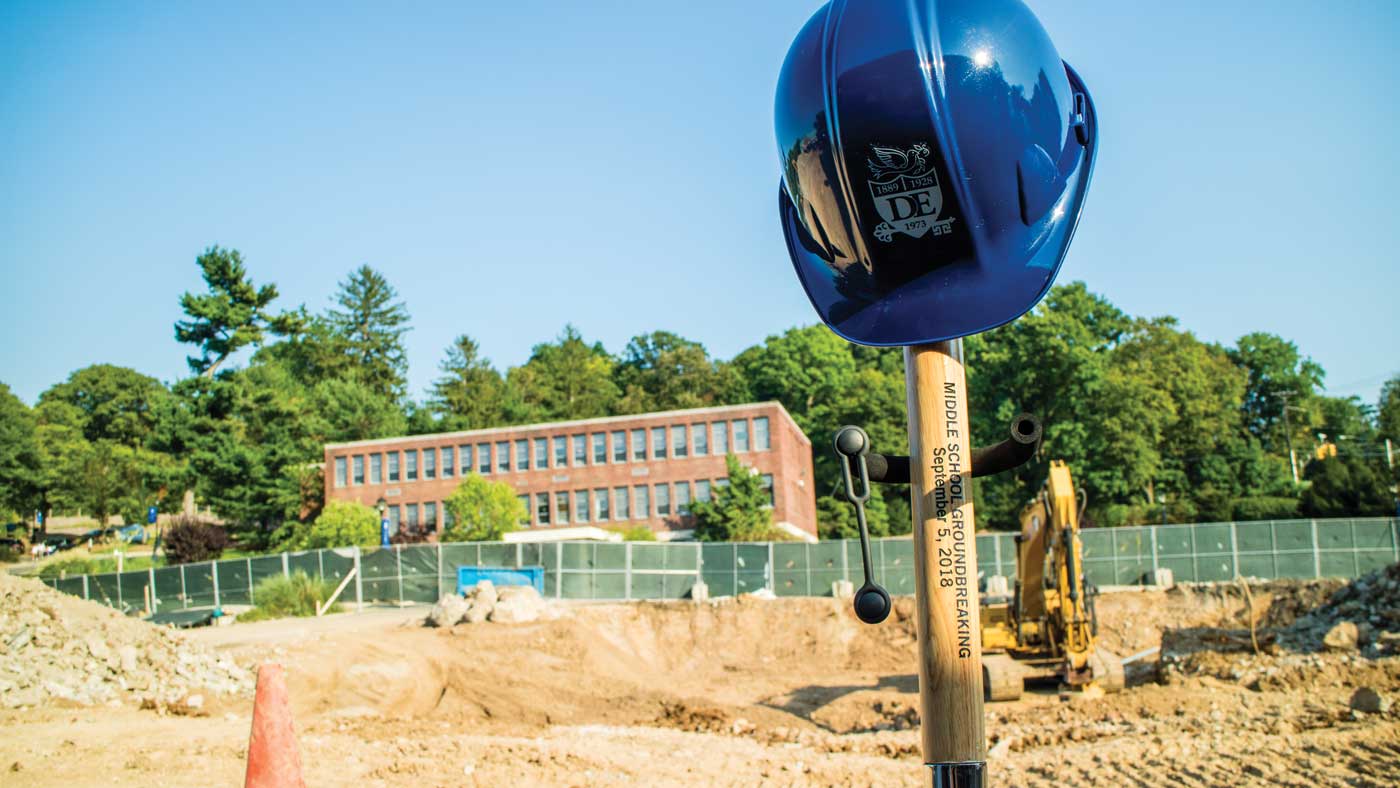 BREAKING GROUND FOR THE NEW MIDDLE SCHOOL: PROGRESS TOWARD THE VISION OF THE VILLAGE PROJECT

Shiny silver shovels were the tools used by participants at the ceremonial groundbreaking for Dwight-Englewood’s new Middle School on September 5.  But the event’s true emphasis was on other tools—namely, how the new Middle School facility will give D-E’s topnotch teachers the tools they need to provide the best education possible to our students.

As Middle School Principal Jonathan Davis pointed out to administrators, trustees, major donors, and the entire faculty of the Middle School who were attending, “We would never go visit a doctor or dentist who was excellent and well educated but still using their equipment from 1965.” Praising the innovative D-E faculty, whose best practices incorporate the latest research on neuroscience and learning, he said,

President of the Board of Trustees Ray Spitzley noted that a mere four years ago, the community was celebrating the groundbreaking for the Hajjar STEM Center, which has had a transformative impact at D-E. The new 30,000-square-foot building, designed by Gensler—the same architectural firm that created the Hajjar STEM Center—represents another “milestone” for the School as it executes its long-range Master Plan. The board’s Buildings and Grounds Committee, chaired by Scott Mager, was instrumental in bringing the project to fruition.

The building’s design incorporates input from the Middle School faculty and possesses aspects and features that they deemed important, including providing an appropriate physical space for students from sixth to eighth grade, who span different stages of growth and maturity; retaining the benefits of grade-level affiliation while promoting discipline-based work; meeting the needs of teachers for better faculty and meeting spaces; and leveraging technology to enhance both learning and dissemination and presentation of student work.

D-E community members have embraced the objectives of the building project. About two dozen major donors were on hand to wield shovels for the ceremony. De Jarnett praised all the donors not only for their belief in the vision of the School but also their willingness to act to push forward a project that will have “effects that will last for generations.”

The new Middle School building is taking shape and should be completed next year. The construction site preparation that has occurred thus far has included the pouring of the foundation, and steel beams installation. The Middle School faculty will continue to meet with architects in the coming months to finalize decisions about learning spaces and furnishings.