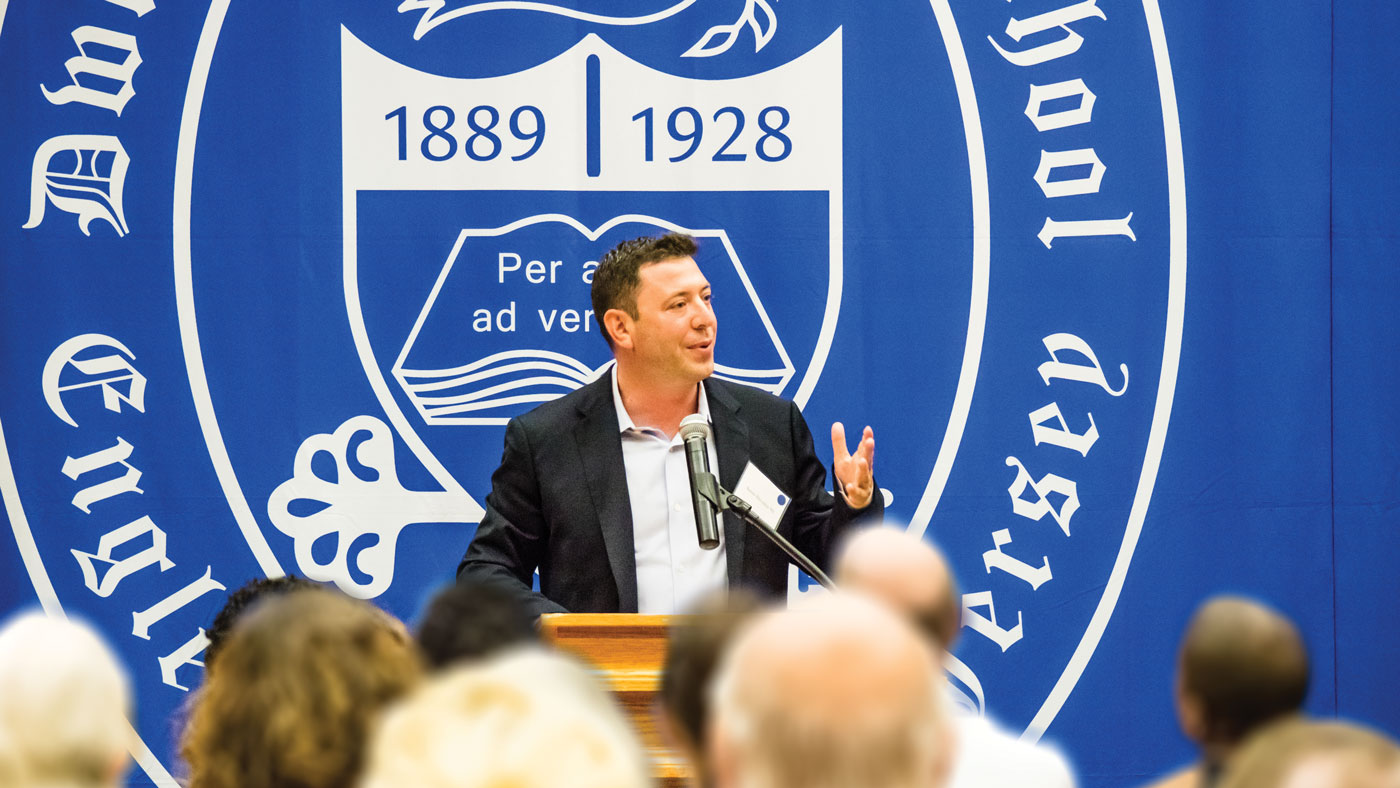 when 2018 Distinguished Alumni Award recipient Aaron P. Dworkin ’93 arrived as a new sophomore at Dwight-Englewood, he found peers who were eager to learn, teachers and administrators who took the time to help him individually, a caring community, and a plethora of ways to get involved—student government, sports, clubs. In short, he found opportunities. Opportunities to learn, to grow, to gain confidence, to discover his strengths and interests.

Today as the president of the After-School All-Stars (ASAS) National Network, an award-winning nonprofit that offers daily after-school and summer programs to some 75,000 low-income students around the country, he often invokes the “opportunity gap” that is the norm for so many kids in inner-city schools.

Closing that opportunity gap is what his organization is all about. Its mission is to “Provide comprehensive after-school programs that keep children safe and help them succeed in school and in life.” The organization’s Career Exploration Opportunities (CEO) initiative, for example, fosters financial literacy and other skills while helping students discover and plan for their future careers. Another initiative, Sports as a Hook, is a sports-based youth development program that promotes leadership and teaches a variety of skills.

“I would go to all these gyms and leagues and I’d see hundreds of great guys, all of whom I thought could be great mentors.”

Dworkin has been with ASAS since 2007 and has been instrumental in establishing the national model and growing the organization, which now has chapters in 20 major cities. He spends his time managing the local affiliates and overseeing strategic planning, program, evaluation, advocacy, expansion, partnerships, and leadership training efforts.

There have been many highlights along the way. For example, at the age of 36, he went “back to college,” sleeping in a dorm, eating in the cafeteria, and taking classes—alongside a group of teenagers who had just finished 8th grade. It was part of CampUs, a weeklong program that brings to college campuses students at risk for dropping out of school, helping them understand why graduating is important and how college leads to fulfilling careers. The overnight experience is part of ASAS’s We Are Ready initiative, which was developed based on research showing that the best time to intervene to prevent kids from dropping out of high school is actually before they even enter high school.

Another highlight for Dworkin came in 2016 at a gala in Washington, DC, when on behalf of his organization he accepted an Impact Award from Partnership for a Healthier America, the national nonprofit whose honorary chair is Michelle Obama. The award recognizes the group that demonstrates a measurable impact at the community level in building a healthier future for America’s children.

Dworkin’s career in battling such big national issues as the youth obesity epidemic, the high dropout rate, and the lack of college and career counseling for underprivileged kids began with the simple desire to give back. He started volunteering for Big Brothers Big Sisters. And then, as he explained in his remarks at Dwight-Englewood’s commencement for the Class of 2018, he had an epiphany about how to connect kids with mentors. “I would go to all these gyms and leagues and I’d see hundreds of great guys, all of whom I thought could be great mentors except they didn’t want to,” he said. “But they were willing to stop whatever they were doing on Tuesdays and Thursdays at 7 o’clock to play basketball.” He and D-E classmate Joe Stetson ’93 decided to put two and two together, founding a program called Hoops & Leaders. Dworkin explained, “We’ve got all these guys, we got all these kids, we got the funds, we got the New York City Parks Department to give us a gym, we refereed the games, we served food, we led the drills, we had leadership activities.” And so was born a way to enhance the lives and prospects of kids with few opportunities.

While running Hoops & Leaders, Dworkin pursued other career options, including working for the Coro New York Leadership Center and for Moody’s Investors Service, but the commitment to helping underprivileged kids remained central to his life. It has been his full-time career for more than 10 years.

D-E provided him with essential opportunities that too many students do not have access to, he says. Think of the number of college counselors at D-E versus in the public schools, where there is one counselor for 1,000 students. Think of a D-E tradition like the Alumni Power Breakfast. It is a great example of social capital and how kids are getting exposed to adults with successful careers. It’s a far cry from the students he’s met who don’t know what careers are even out there, much less the steps to take to pursue a dream career. Dworkin views his job as “lighting up pathways for people” and “connecting the dots” for kids who—through no fault of their own—simply “don’t know what they don’t know.”

Dworkin says he takes his inspiration from D-E. And now as the most recent Distinguished Alumni Award recipient he wants to use his experiences to inspire the D-E community to help close the opportunity gap. His closing words from his Commencement Keynote are an apt extension of this charge. In his words:

“My question for students today is: What do you do with the gifts that this school has given you? To whom will you pass on these gifts?”