A little over a year ago, I started talking to my friends about wanting to do Spring Theater and what I might want to do. All of our minds were stuck in the idea of it being a musical, because Spring Theater had been musicals since I’d been in the High School. Then, Wiley June had the idea of writing a play for Spring Theater which I would then direct. I thought that this was an absolutely fantastic idea, which left us with only one question: What should this play be about?

At the time, I had just finished binge watching Black Mirror on Netflix and thought well an episode of that might translate to the stage. Black mirror is an anthology show, so every episode has different characters, but they’re all linked by a common theme of technology destroying humanity. What if we could do that in a play spanning three times: past present and future. After bringing up the idea with Wiley June, the writer of Eureka Breaking, we agreed that it could be very interesting to put on that sort of show. So all we needed was a theme, and after some debate, we came up with a theme of the destruction of creativity, and where does creativity even come from.

At that point, it was out of my hands. Wiley wrote a fantastic show about creativity, art, and what it means to be an artist. Those things are what this show is about from the first act with a 1950s boarding school, to the second with a present day art gallery, to the third with a futuristic band. Of course, something even more out of my hands happened with the Coronavirus, and now we’re having to deal with that.

I told my mom our new plan to turn this play into a radio play, to which she replied, “Well why not record the zoom and just do it like you have been rehearsing?” which was a fair question. However, what I realized is that I don’t want this show to be held back by COVID-19. I don’t want this play to be held back by the fact that it was supposed to be performed live, but now we must social distance. And so, with even more help from Wiley, he updated the script to a radio play which is something I think everyone’s really going to enjoy.

Actors in order of Appearance

Wiley June (The Man): Hi, my name is Wiley! I’m the author of the play, as well as the actor who portrays “The Man.” Throughout the story I function as a narrator, guiding the audience through the three interlinked stories and towards their eventual conclusion. In addition to working on this project, I have acted in well over a dozen productions with my local Shakespeare company (in plays such as Othello, The Taming of the Shrew, Romeo and Juliet, and many more). Last summer, I directed, wrote, and starred in an original short play which went up at the New York Theater Festival. I carried this enthralling experience into senior year, and set my sights higher by writing a full length play in the form of ‘Eureka, Breaking.’ I hope you all enjoy listening to it as much as I enjoyed creating it!

Jared Tauber (Calvin): Jared last appeared in the Dwight-Englewood production of David & Lisa. When director Chris Meleski said “I’m putting together a crew,” Jared said “You son of a gun, I’m in. What’s the job?” Chris said “Here take this script” and Jared said “Okay” and so Jared spent the rest of his foreseeable future (approx. 1 hour) reading this so called “script” and found one (1) spelling error. Jared said, “Who in the name of Dr. De Jarnett wrote this?” and Chris said “That would be Wiley June.” So Jared goes home that night and calls Wiley June on his work phone because Jared is a professional who respects others boundaries. He dials 867-5309 and when Wiley picks up, all Jared could hear was ominous, heavy breathing. Jared knew immediately that this was the guy. Jared said, “It’s spelled p-h-o-l-o-u-r-i-e” and Wiley said “I’ve never even been to Trinidad and Tobago” which is Wiley-speak for “You’ve got the part.” And the rest is history.

Theodore Coulson (Zachary): Theo was previously observed in Newsies (Romeo), Radium Girls (Von Sochocky), Cats (Victor), David and Lisa (Simon), The Mystery of Edwin Drood (Mr. James Throttle), Romeo & Juliet (Abraham / Apothecary), and #Dreaming (Edgar), and once again appears to be the nerdiest person on the cast list. Observed interests include physics, aviation, art, and history, to which most of this individual’s mental capacity seems to be dedicated. In his natural habitat, most of his time is spent on games, writing, programming, drawing, and Dungeons and Dragons. Despite difficulty due to viral pathogens, this individual seems to have remained fairly optimistic, and hopes the experience of the play will be considered worthwhile by its recipients.

Tristan Fisher (Mr. Gray): Tristan makes his acting debut in Eureka Breaking. Born in New York, he has been lifelong student at Dwight-Englewood. Previously, he participated on their track and cross country teams. He is grateful for being given the opportunity to work on this play.

Lilly Trentacosta (Claire): Lilly did not submit a biography.

Ally Abramson (Mrs. Stoutman, Elouise): Ally was last seen in Newsies(Nun/Bowery Beauty/Newsie): Seen in  Middle School productions of Likes(Ashley): The Lion King Junior(Zazu): Once On This Island(Andrea): the Show Choir productions of Joseph And The Amazing Technicolor Dreamcoat, New York: The City Of Revolution, and Are You Smarter Than A Middle School Principal? She won the D-E Middle School Performing Arts Award and was previously seen in her fifth grade opera, The True Test. Outside of D-E she was in the Tripp Lake Camp productions of The Lion King Junior and The Emperor’s New Clothes. Outside of theater she enjoys Figure Skating and fashion design.

Ruth Myint (William, Oscar, Announcer): Ruth has performed in shows such as Once On This Island (Storyteller), Aladdin (Genie), The Little Mermaid, Newsies (Splasher), and Radium Girls (Reporter, Harriet). She also enjoys cheese and memes.

Audra Baruch (Cecily): Audra Baruch  is new to Dwight-Englewood and has appeared in D-E productions such as Radium Girls (Grace Fryer) and Newsies (Race). Outside of D-E, she has appeared in productions of Barnum (Charity), Escape! the Musical (Mrs. Harrington), Little Shop of Horrors (Chiffon), Tall Girls (Jean), Crazy for You (Polly), Tommy (Nurse), Fiddler on the Roof (Beilke) and more. Audra is thrilled to be playing Cecily in this brand new production of Eureka: Breaking and be the first of hopefully many future Cecilys of this play. Audra is an avid singer and actress and music engineer. If you want to know more about Audra, check out her YouTube channel!

Chris Vergos (Arthur): Chris is very excited to be a part of Spring Theater this year even though it is his last show of high school. Previous roles he has played during his time at D-E include C.B. Charlie Lee in Radium Girls, Benvolio in Romeo and Juliet, and Freddy in Carrie: The Musical. He is incredibly thankful for all of the hard work Chris Meleski has put into the show as its stellar director and for making this show work.

Whitney Segar (Lola): Whitney has performed in Newsies (Katherine), Cats (Jellylorum), Carrie (Norma), and Drood (Ensemble). She is the president of jazz rock and really enjoys all things music. She would like to thank all the people who dedicated their time and energy to putting on the production. It’s been a long and crazy road but we made it!

Doug Rosa (Gerard): Douglas is very excited to be participating in the show. Douglas is a rising Senior at Dwight Englewood and this will be his sixth show at DE. His Dwight Englewood performances include a townsfolk in Mystery of Edwin Drood, a soldier in Dogfight, Mr. Mistoffelees in CATS, an extra in Carrie, and Oscar in Newsies. He has also played Mufasa in Lion King Jr. and one of the Three Little Pigs in Shrek Jr., both shows occurred outside of DE. Hope you enjoy the show.

Darby Lee-Stack (Elizabeth): Darby is dancer, singer, actress, and model. She loves to bake, jump on the trampoline, and make people laugh. This was her first year at DE and she couldn’t have loved her theatre family more. Darby has been in multiple short films and George Balanchine’s The Nutcracker. She thanks her family for supporting and loving her throughout and hopes everyone is staying safe and healthy during this chaotic time.

Joe Murphy (Lincoln): Joe has appeared in the Middle School productions of Disney’s The Lion King Jr. (Ed);  and “Likes” (Wally), the Show Choir productions of Joseph and the Amazing Technicolor Dreamcoat (Asher / Butler);  Walt in Wonderland (Tigger);  and Starlight Express (Nintendo), and in the Upper School productions of Newsies (Crutchie); of The Radium Girls (Martland / Dr. Knef / Store Owner / Lovesick Cowboy);  Cats (Skimbles-hanks);  and Les Miserables (Gavroche).  Outside DE, Joe has been seen productions of Jonah and the Whale (Jonah);  The Sound of Music (Kurt);  Urinetown (Officer Barrel);  and has been an extra in several movies filmed in New York.

Béa has spent a lot of her life in theater and is very happy to be involved with this radio play as her last high school theater experience. She has been in a few other D-E shows such as The Sound of Music and Radium Girls. She has also been active in theater outside of school most recently preforming in Within The Ice also written by Wiley June. She enjoys creative writing and lab work and looks forward to wherever a college education may take her. Béa would like to thank her friends and family for their support and the cast of Eureka, Breaking for continuing through to the end on this amazing project.

Jordan Sobers (Carly):Jordan has helped and appeared in different Dwight-Englewood productions such as The Little Mermaid Jr (Costumes), Likes (Rowan), and Newsies (Specs). Outside of DE, she has been in Aladdin (Narrator).She has a bunny named Coco which is her best friend. She is also interested in whales and marine biology.

Josie Blough (Josie): Josie did not submit a biography. 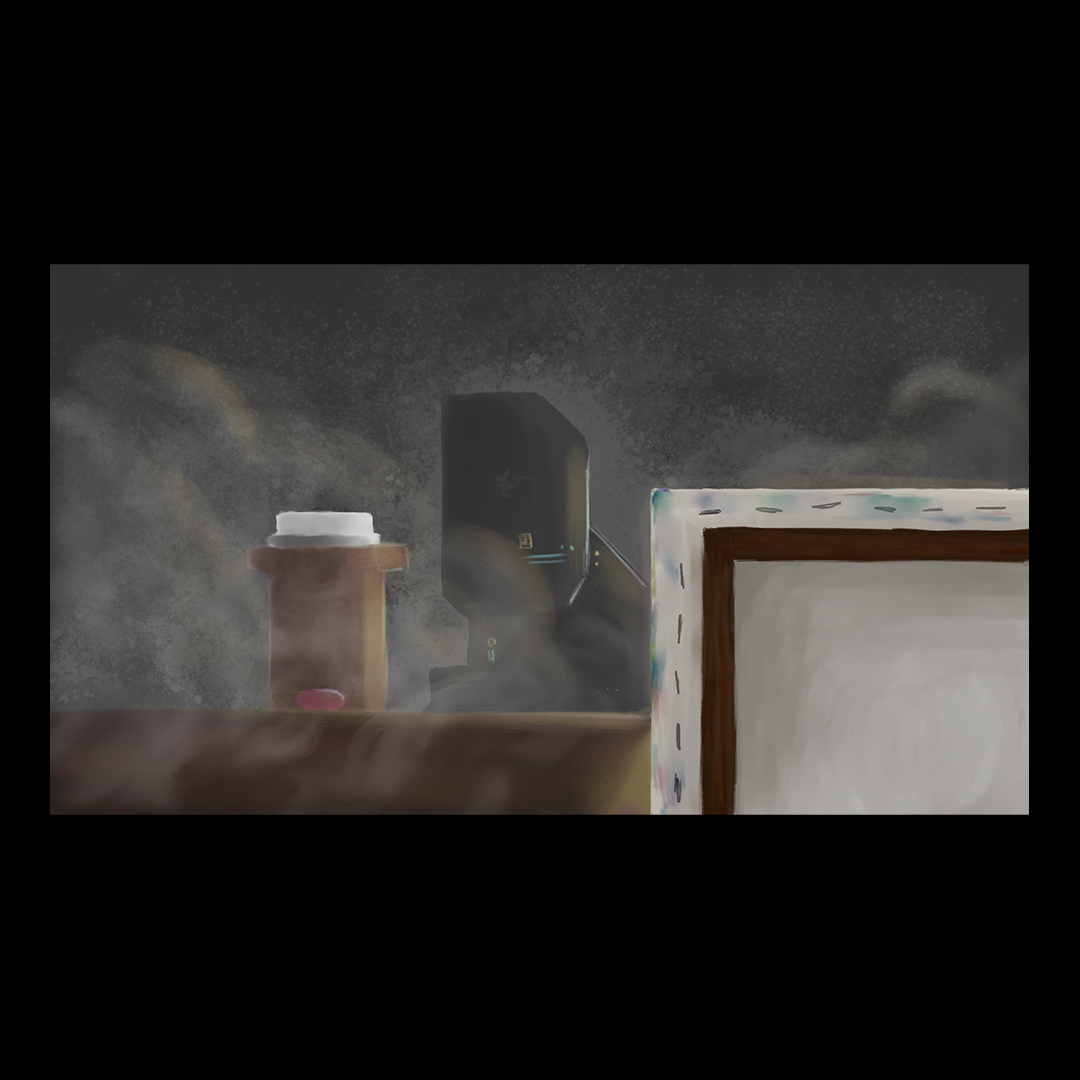