In Vise and Shadow, the critically acclaimed poet and memoirist Peter Balakian brings together his most influential essays of the past 25 years. He argues that the force of the lyric imagination is able to hold experience under pressure like a vise — while it also shadows history. Precise, lyrical, and eloquent — Balakian’s essays explore the ways poetry engages disaster and ingests mass-violence without succumbing to the didactic. He gives us new insights into the relationships between trauma, memory and aesthetic form; his essays on major Armenian voices and the aftermath of genocide are a fresh contribution to contemporary literature and art. Other essays engage painting, collage, song-lyrics, and film as forms of enduring lyric knowledge. With a range that includes Elia Kazan, W. B. Yeats, Bob Dylan, Yeghishe Charents, Joan Didion, Hart Crane, Primo Levi, Robert Rauschenberg, Arshile Gorky, and Adrienne Rich, Vise and Shadow offers a cosmopolitan vision of the power and resilience of the human imagination. 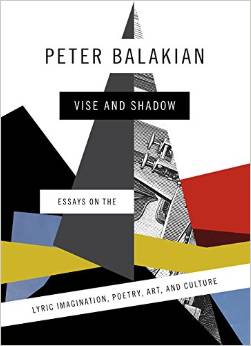 »  » Vise and Shadow: Essays on the Lyric Imagination, Poetry, Art and Culture