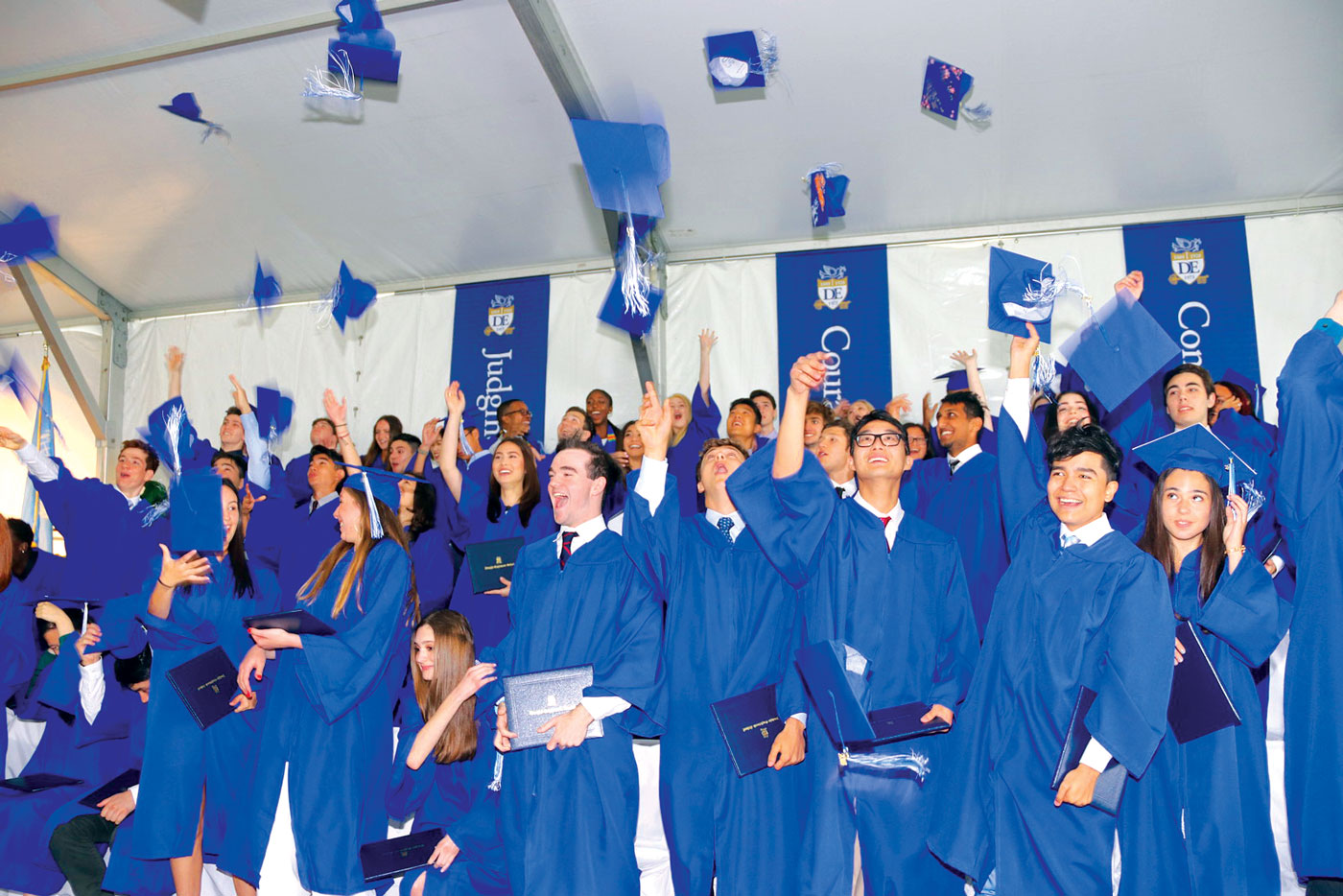 On Sunday, June 3, Commencement was held for the D-E Class of 2018.  117 seniors were awarded diplomas by Head of School Dr. Rodney V. De Jarnett, Upper School Principal Joseph Algrant, Class of 2018 Dean Kim Lalli, and Board of Trustees President Ray Spitzley. The ceremony began at 10:00 a.m. to the sound of bagpipes and a color guard processional by all D-E faculty and staff members and Trustees. The soon-to-be graduates were led onto Leggett Field where approximately 1,200 D-E family members, friends, and guests awaited their arrival under a massive white tent, while the D-E Orchestra performed Elgar’s “Pomp and Circumstance March No. 1.”

Commencement ceremony keynote remarks were given by alumnus Aaron Dworkin ’93, President of National Network at After-School All-Stars, and a recipient of the School’s prestigious Distinguished Alumni Award.

The D-E Orchestra and Stage Band ensembles performed with solos by seniors including Alexandra Tarsinov ’18, who sang “Somewhere” from West Side Story*, and Nathan Song ’18 and Joey Viviano ’18, who joined vocal forces for “The Way You Look Tonight” by Fields and Kern. The Senior Jazz Rock Ensemble also performed “Ain’t No Mountain High Enough” by Ashford and Simpson.

During the ceremony, special readings and speeches were made by D-E School administrators and several members of the Class of 2018. Marwah Kiani ’18 and Jalen Watson ’18 provided reflective remarks and Henrique Neves ’18 read an excerpt by Albert Camus. Additionally, several seniors were recognized with special honors as follows: The Bailey Award was awarded to both Marwah Kiani ’18 and Amina Sadural ’18; The Trustees’ Award was awarded to Henrique Neves ’18; and The Senior Citizenship Prize was given to both Madeleine Kachikian ’18 and Jalen Watson ’18.

Commencement concluded with the D-E Upper School Orchestra performing Respighi’s “Ancient Aires and Dances” while a color guard of faculty/staff and Trustees started the recessional of the now-graduates onto Leggett Field. Graduates were each able to ring the Dwight-Englewood School ceremonial bell as they were greeted and welcomed. Congratulations to all our Class of 2018 graduates!