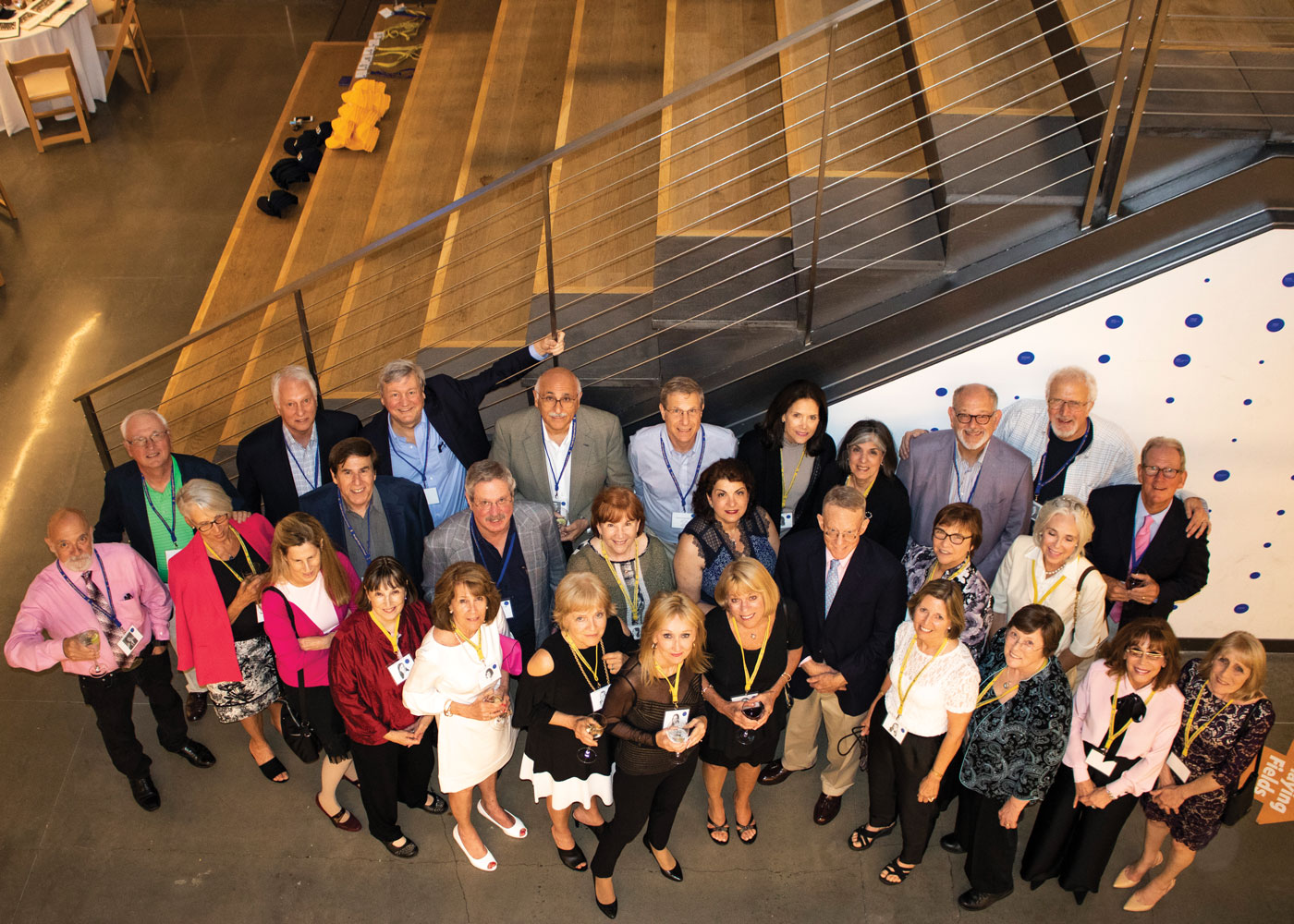 lumni from the Dwight School, the Englewood School for Boys (ESB), and Dwight-Englewood School gathered for Reunion 2018, to celebrate milestone reunion years and to honor select alumni. The evening of Friday, June 1, kicked off numerous special events on the D-E School campus and around the metro area. Dwight School and ESB alumni from the Classes of 1968 enjoyed a 50th Reunion Dinner hosted by Head of School Dr. De Jarnett in the Hajjar STEM Center.

On Saturday, June 2, alumni from the Classes of 1978, 1983, and 1988 gathered together with Head of School Dr. De Jarnett and Alumni Director Maria Sanchez Gardner ’78 in the lobby of the Modell’s Sports Complex to dedicate a new interactive display featuring all prior inductees of the Bulldog Hall of Fame.

The 2018 D-E Distinguished Alumni Award was presented to Aaron Dworkin ’93 and Isaac-Davy Aaronson ’98. The Distinguished Alumni Award was established in 1997 to pay special tribute to alumni of the Dwight School, the Englewood School for Boys (ESB), and D-E. The award is presented for exemplary professional and/or volunteer accomplishments. It honors alumni whose achievements deserve special recognition by the school and by fellow graduates.

As president of the National Network of After-School All-Stars (ASAS), Aaron Dworkin works to ensure program quality, collaboration, growth and sustainability amongst the ASAS chapters currently serving nearly 75,000 low-income students in 400 Title I schools in 19 major markets across the US from Harlem to Honolulu. Aaron also leads ASAS government advocacy work and the national program department which offers chapters support with partnerships and evaluation. They provide these national initiatives: We Are Ready middle to high school transition; CEO career exploration; Sports as a Hook health and fitness; and Life Service Action. Aaron previously served as the first-ever ASAS National Program Director and is a frequent contributor to Youth Today and presenter at education conferences.

Aaron founded and directed Hoops & Leaders, a leadership training and mentoring program for low-income youth in New York City. Aaron has also worked as Director of Strategic Development for the nonprofit Coro New York Leadership Center and in the private sector as a public finance analyst for Moody’s Investors Service. Aaron is a graduate of Tufts University, a former Coro Fellow in Public Affairs and holds master’s degrees in education and public administration from Harvard University and Columbia University, respectively.

Isaac-Davy Aaronson ’98 has been Segment Producer for The Rachel Maddow Showon MSNBC since 2014, and during that time he has won two News & Documentary Emmy® Awards for Outstanding News Discussion & Analysis (“An American Disaster: The Crisis in Flint”); and Outstanding Live Interview: (“One-on-One with Kellyanne Conway”). Following his graduation from D-E Isaac-Davy received his BA in English and his MFA, both from Columbia University. His prior experience also includes working as a producer, reporter, and host for North Carolina Public Radio New York Public Radio – WNYC.

Alumni were also inducted into the 2018 Hall of Fame, which was established in 1996 to honor those individuals who have achieved a high level of success during their careers as student athletes and coaches, or through significant contributions to the school’s athletic program. Its purpose is to perpetuate the memory of those who have brought distinction and excellence to the Dwight School, the Englewood School for Boys, and the Dwight-Englewood School. Remarks were made on behalf of Hall of Fame inductees Alison Désir ’03, Coach Karel “Charlie” Lender (posthumously honored), and the 1987 and 1988 D-E Field Hockey Teams. For more on these Hall of Fame inductees, please see pages 26-27.